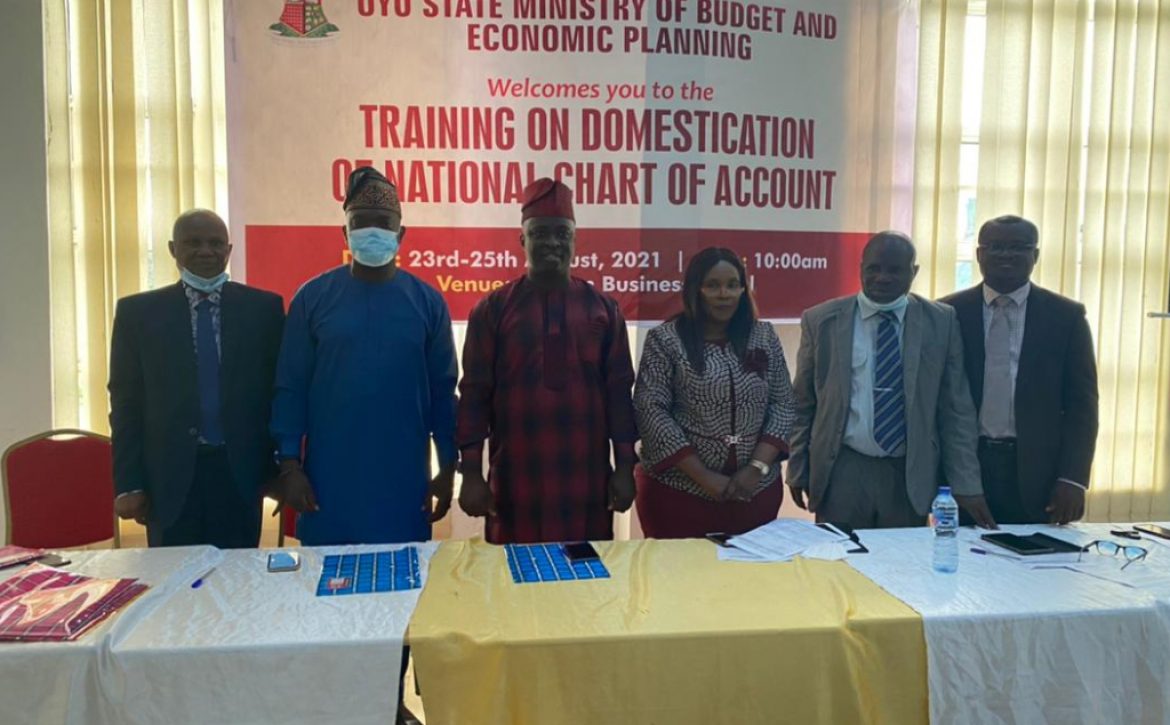 The Oyo State Government has embarked on a Three-Day Workshop for Ministries, Department and Agencies, (M.D.As‘) on alignment of National Chart of Account (N.C.O.A), which encompasses budgetary and accounting processes, as the 2022 fiscal year approaches.

The workshop, which commenced on Monday was organized by the Oyo State’s Ministry of Budget and Economic planning, came weeks after town-hall meetings were held in seven geo-political zones of the State, which recorded the attendance of critical stakeholders, for citizens’ engagement in public policies and Government’s activities.

While declaring the training session open at the Ibadan Business School, the Secretary to the State Government, Olubanwo Adeosun, through the Special Assistant on Budget and Economic Planning to Governor Seyi Makinde, Mr. Babatunde Musbau, lauded the stakeholders engagement style in the implementation of projects in the State.

Musbau described the N.C.O.A as a concrete platform for effective budget preparation as he claimed that the chart addresses budgeting, accounting and analysis of all Government transactions in the three tiers of Government, namely executive, legislative and the judiciary.

He stated that the State administration has re-engineered the socio-economic infrastructure to boost economic viability through Internally Generated Revenue, which the State Government is determined to increase from its sectors.

In his address to participants from Ministries, Department and Agencies during the Training-session, the Senior Special Assistant to the Governor on Economic Planning, Oluwaseyi Ogunsanya, asserted that the workshop was designed to equip the workforce  with adequate skills and knowledge for budget preparation.

Ogunsanya added that the training was borne out of the need to prepare a budget in conformity with global best practices, for development of critical projects and infrastructures, to attain better improvement of standard of living.

While welcoming participants to the training session, the Permanent Secretary, Ministry of Budget and Economic planning, Mofoluke Adebiyi, described the training as an important activity towards reform that would occur in the public service soon.

Mofoluke Adebiyi also described the N.C.O.A as an intensive process for overall understanding of budget’s preparation, as she claimed that balancing is required in all accounting processes.

Facilitator of the sensitization programme, Ayuba Onifade, explained the features of the N.C.O.A to include, flexibility for easy generation of financial reports of the budget which refers to an estimate of income and expenditure for a particular period of time.

The Governor of Oyo State, Engr. Seyi Makinde, has revealed plans to construct a 500,000 litres capacity aviation fuel facility at the Ibadan Airport.

The Governor disclosed this in his keynote address at the stakeholders town hall meeting on citizens engagement on the 2022 budget held at Ibarapa East Local Government Secretariat Hall, Eruwa on Thursday

The Governor, who was represented by the Speaker of Oyo State House of Assembly, Hon. Adebo Ogundoyin noted that the construction of the fuel facility is necessary to improve the standard of the airport.

He stated that the project would be one of the numerous projects just awarded and about to commence in the State, adding that some projects were already in the completion stage and will soon be commissioned.

“Other projects include: the installation of Mini-Grid Energy Projects in Ogbomosho south, Atiba, Ona-Ara and Iwajowa LGAs; construction of Isaba-Ogundoyin road Eruwa; construction and rehabilitation of Iseyin-Oyo road, construction of two-bay permanent fire stations at Atiba and Ibarapa LGAs, amongst others.

He urged Oyo State citizens to be involved in the year 2022 budget planning, in order to record many achievements that will be beneficial to the people of Oyo State.

Also, the Speaker of the Oyo State House of Assembly, Hon. Adebo Ogundoyin on behalf of the Governor of Oyo State, appreciated those that attended the meeting and expressed their minds on what they wanted the Government to do for them, as he said this was essential in other to help the Government to know the right area to channel resources to have a better Oyo State and promised that the Government will fulfill all promises and request of the citizens.

Earlier in her welcome address, the Permanent Secretary, Ministry of Budget and Economic Planning, Mrs. Mofoluke Adebiyi said that the current administration’s open Government initiative is aimed at strengthening civic voices, demonstrating the responsiveness of Government system and promoting the interest of all citizens.

She declared that the last two years have witnessed a tremendous change in the inclusion and participation of citizens in governance through budget development and implementation.

Oyo State Government has hinted on its plans to commence a multi-year budgeting process by 2022.

The State’s Commissioner for Budget and Economic Planning, Barr Adeniyi Farinto disclosed this during a one-day capacity building on Budget, Monitoring and Evaluation which held in Ibadan on Tuesday.

The training which was for Budget officers of ministries, departments and agencies (MDAs) in the State, is to evaluate past budget (2020) and adequately plan towards the coming year’s budget.

The commissioner who was represented by the Permanent Secretary for Budget and Economic Planning, Mrs Mofoluke Adebiyi, noted that the budgeting process has taken a new dimension in Oyo State.

Farinto said the State is almost rounding up on the preparation of the medium term expenditure framework from which future annual budgets will be derived. This means that the introduction of  multi-year budget will cater for 3 years budget which will be reviewed from time to time.

He pointed out that “The budget must be realistic and attainable. Oyo State is the Pace Setters State and this is why all hands must be on deck for the State to catch up with other States ahead and overtake. We must restore the old glory of the State.”

Noting that no sector can perform without budget, he charged the delegates to work diligently to achieving the set target.